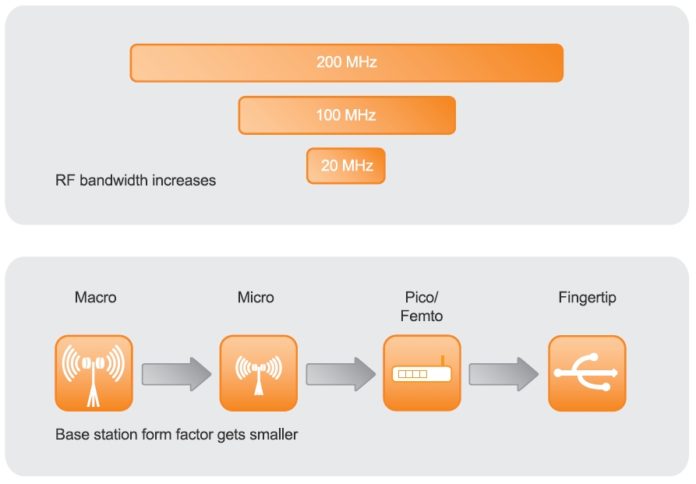 What lies ahead for communications in the next decade? Making long-term predictions is always risky, but we can be confident that, with the right innovation, networks can be capable of supporting up to a thousand fold more traffic. Dubbed ‘Beyond 4G’, such networks will feature higher spectral efficiency, improved latency and a greater density of base stations

This will demand leaps in the underlying communication technology, as well as major network evolution. At Nokia Siemens Networks, we are already involved in research that aims to develop networks ‘Beyond 4G’, but it’ll take a global research and development effort to meet the expectations of users when 2020 rolls around.

It’s early days, but Nokia Siemens Networks is already thinking ahead and is actively engaged in collecting requirements and viewpoints, as well as shaping developments. A path to the next evolutionary stage of the mobile experience is in clear view.

The amount of spectrum available for mobile broadband may increase by up to 10 times, but global coordination work will be required to achieve that target. Mobile broadband data in many countries is carried today by the UMTS 2100 MHz band with a total of 2 x 60 MHz of spectrum.

Refarming all 900 and 1800 MHz bands for mobile broadband would give a total of 340 MHz of spectrum. With 800 MHz and 2600 MHz allocations, the total spectrum will be 600 MHz. These spectrum blocks are already available in a few countries and will be widely available by 2015. The entire spectrum so far available for mobile communications is more than 1,100 MHz, in addition to a large amount (about 500 MHz) of unlicensed spectrum at 2.4 GHz and 5 GHz.
Evolving radio technologies

The next technology step in the radio interface will be LTE-Advanced, which will raise spectral efficiency and offer peak rates of more than 1 Gbps. However, radio evolution will not stop with LTE-Advanced. Digital processing power will continue to grow to handle higher data rates, radio frequency (RF) technologies will support wider bandwidth and wider optical fiber deployments will provide faster connections to base stations.

As spectral efficiency increases and radio latency is pushed towards limits governed only by the speed of light, base stations will be deployed more densely.

More densely deployed base stations will result in heterogeneous networks with radio nodes varying from stand-alone base stations to systems with centralized processing. Diverse radio access technologies, including LTE, HSPA+, WiFi and Beyond 4G, will have to be integrated flexibly in any combination. Furthermore, available spectrum will be more fragmented and may even be shared among operators according to new license models.

The need for greater energy efficiency will also play a role, promoting the use of networks that can distribute radio resources intelligently and dynamically to achieve the lowest overall energy consumption.

The enormous variety of equipment and devices in heterogeneous networks will have a wide range of performance demands. This call for a fundamental rethink of the way in which networks are managed. Cognitive Radio Networks (CRN), the next evolution of Self-Organizing Networks (SON), will be vital. CRN will enable flexible spectrum management, device-to-device networking and wideband, software-defined radio.

More from the air interface

The air interface has a critical impact on network performance. For example, it is generally accepted latency must decrease in line with rising data rates. Yet improving latency to deliver the required customer experience in the future may require changes in the air interface not achievable with LTE-Advanced. A more versatile approach will be needed.

Similarly, dealing with interference from other system elements is essential. While basic means to suppress interference already exist, the increasing level of computationally-intensive signal processing, even in hand-held terminals, will lead to more advanced methods.

The capabilities of wireless devices have come a long way in the past 20 years and the next decade will witness further intense development. For instance, radio is only one small part of the capability of today’s smartphones. The next generation of wireless devices will support a vast array of services with a powerful and complex communications engine. Ubiquitous radio access will be essential to support these new applications and services with optimized power consumption.

applications and services, such as High Accuracy Indoor Positioning, Instant Communities, Mobile Radar and many more.

Nokia Siemens Networks research is at the forefront of the global drive to make Beyond 4G systems a reality. The company makes thousands of contributions to standardization work, and collaborates widely in international research projects and with universities and leading operators. In addition, its Smart Labs work closely with application, smartphone and operating system vendors and research teams on several continents.

Other major players in industry and academe are playing their part, with the ITU-R (International Telecommunication Union – Radio communication sector) working to guide and harmonize future developments.

The next big shift in cellular mobile communications: 5G