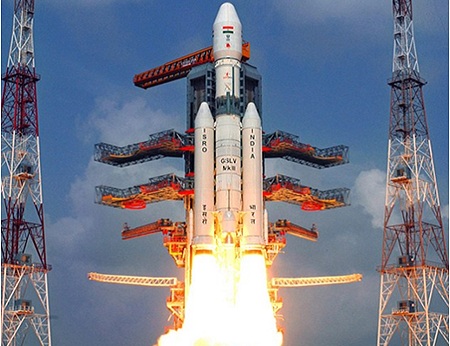 India’s space agency launched a flock of 104 satellites into space over the course of 18 minutes on Wednesday, nearly tripling the previous record for single-day satellite launches and establishing India as a key player in a growing commercial market for space-based surveillance and communication.

The launch was high-risk because the satellites, released in rapid-fire fashion every few seconds from a single rocket as it traveled at 17,000 miles an hour, could collide with one another if ejected into the wrong path.

“They have spent months figuring out how to make an adapter, which will release these small babies into space one after another,” said Pallava Bagla, science editor for NDTV, a cable news station. “Now, all of them are in space.”

Wednesday’s launch was being watched closely by firms that place satellites in orbit, because India’s space agency charges substantially less than its competitors in Europe and North America, said C. Uday Bhaskar, the director of the Society for Policy Studies, a public policy research group based in New Delhi.

Eighty-eight of the 104 satellites released on Wednesday were tiny, weighing about 10 pounds. Called Doves, they belong to Planet Labs, a private company based in San Francisco that sells data to governments and commercial entities, and they constituted the largest satellite constellation ever launched into space.

The chairman of the Indian space agency, A. S. Kiran Kumar, has said that commercial fees covered around half of the cost of Wednesday’s mission.

“I’m sure the global market will be looking at this pretty closely,” Mr. Bhaskar said. “If they can send 90 of them up for $10 million, hypothetically, then just by Moore’s Law, next time they should be able to send 120 satellites.” Moore’s Law originated in the semiconductor industry and held that the number of components that could be crammed onto a computer chip would double at regular intervals.

The previous record was set by Russia’s space agency, which launched 37 satellites into orbit with one rocket in 2014.

India is fascinated with world records, and Wednesday’s satellite launch prompted a wave of celebratory crowing, some of it aimed at Asian rivals. Many declared it a “century,” a term for a cricketing milestone when a single batsman manages to score 100 runs in a single innings.

The president, Pranab Mukherjee, called it “a landmark in the history of our space program,” while Alok Kumar Dubey, a right-wing activist, said on Twitter, “Look china, pak THIS is Our power.”

The Indian Space Research Organization has gained attention in recent years for staging successful missions at very low cost, in part because its scientists are paid less.

In 2014, India sent a spacecraft to Mars for $74 million, a small fraction of the $671 million the United States spent for a Mars mission that same year, and showing up a regional rival, China, whose own Mars mission failed in 2012.

By charging significantly less to launch satellites into space, India could carve out a niche in the $3 billion to $4 billion market for detailed information about climate, topography and defense, Mr. Bhaskar said.

Robbie Schingler, a former NASA scientist and a co-founder of Planet Labs, described himself as “ecstatic.”

“The sequencing needed to be very precise,” he said. “It worked perfectly and flawlessly.”

Shri G. Madhavan Nair, a former chairman of India’s space program, said newer satellites weigh as little as two pounds, meaning that there is “no limit” to the number that can be launched into space at a time — a trend that he said worried him, as most satellites are operational for only two or three years.

“We are all concerned about space debris,” he said. “After that, it becomes a dead mass floating in space. Personally, I will not recommend such an increase in the number without a practical purpose.”