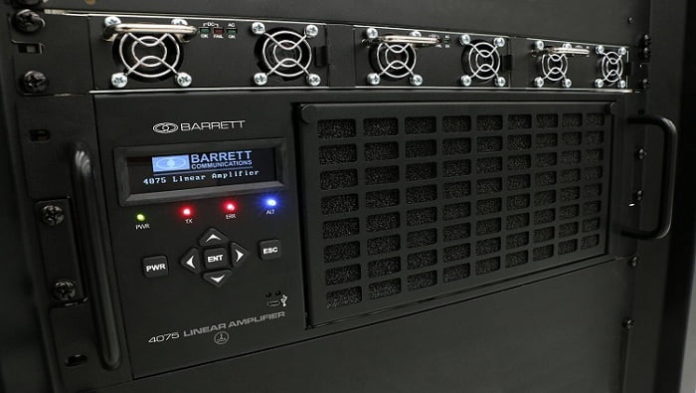 E-mail and messaging have become the common and preferred methods in modern communications. Barrett’s innovative liquid cooled amplifier, when married with the Barrett 4050 SDR Transceiver to produce the Barrett 4075 HF High power transmitter, will run continuously at high power for extended data transmission and at optimum temperatures resulting in greater reliability.

The radio is intended as a static base station for use in areas where HF radio may be the only viable communications infrastructure. It provides a compact, high power HF transceiver which is easy to use for the inexperienced operator and ideal for use in austere environments.

Managing Director of Barrett Communications, Mr Greg O’Neill explained “It is designed for users who require robust and reliable long-range data communications equipment with low logistical demands. This product is aimed at a broad cross-section of the market, including peacekeeping and humanitarian organisations, non-government organisations (NGO), security organisations and police; and commercial businesses such as oil exploration.

The advanced liquid cooled solid state design of the 4075 amplifier is believed to be the first of its kind. The cooling system, which uses a water propylene glycol mixture, allows the transmitter to run continuously at optimum temperatures and reduces the requirement for forced air cooling. This is a more efficient design, consumes less power, offers greater reliability, extended service life and provides a much quieter working environment.

The Barrett 4075 High Power HF transmitter will be on display at the following exhibitions: