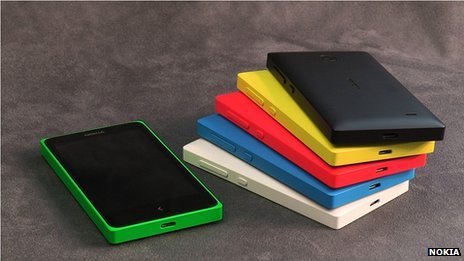 Nokia has unveiled its first family of Android phones at the Mobile World Conference in Barcelona.

Up until now Nokia’s suite of smartphones has used the Windows operating system. The announcement had been widely expected despite Microsoft detailing plans to buy Nokia’s mobile division at the end of 2013.

Analysts have called the announcement a “perplexing strategic move”.

The entry-level X model will feature a 4in (10.2cm) screen with 512MB Ram and a three-megapixel camera. The X+ will have 768MB Ram and a 4GB MicroSD card.

The X will go on sale immediately in several territories including Europe and Asia Pacific. The X+ and XL will launch in April.

Users who buy one of the X models will be able to use Microsoft’s free cloud-storage system, OneDrive. The software giant’s email software, Outlook, will also ship as standard on all models.

‘Bitter pill’
The messaging service BlackBerry Messenger (BBM) will be pre-installed on the phones as will social network Twitter, video app Vine and the game Plants vs. Zombies 2.

More than 1.1 million devices running Android are expected to ship this year compared with 360,000 using the Windows operating system, according to data from research analysts Gartner.

At the time, the company’s then chief executive, Steve Ballmer, called the deal a “big, bold step forward”, adding the company was in the process of transforming itself from one that “was known for software and PCs, to a company that focuses on devices and services”.

Critics say Microsoft has been too slow to respond to the booming market for mobile devices.

Nokia was once a leader in mobile phones but has struggled in recent years.

Analysts CCS Insight head of research Ben Wood said: “Nokia was caught between a rock and a hard place.

“Non-participation? in the low-cost smartphone market where Android is rampant leaves a lot of money on the table but turning to Android must have been a bitter pill to swallow.

“If you stand back, for a soon-to-be Microsoft-owned company to embrace Android is a perplexing strategic move.

The deal between Microsoft and Nokia has not yet been finalised, and at a Microsoft press conference on Sunday the vice-president of operating systems for Windows, Joe Belfiore, was asked what he thought about Nokia’s decision to launch an Android phone.

“Given its looming ownership by Microsoft, it will be doing everything it can to get Microsoft to push Windows ?Phone down to the entry-level smartphone space and will be hoping it’s flirtation with Android does not dilute this,” he said.

Nokia’s senior vice president Stephen Elop confirmed that the Lumia remains “our primary smartphone platform” and that the X range would be used as a “feeder system”,