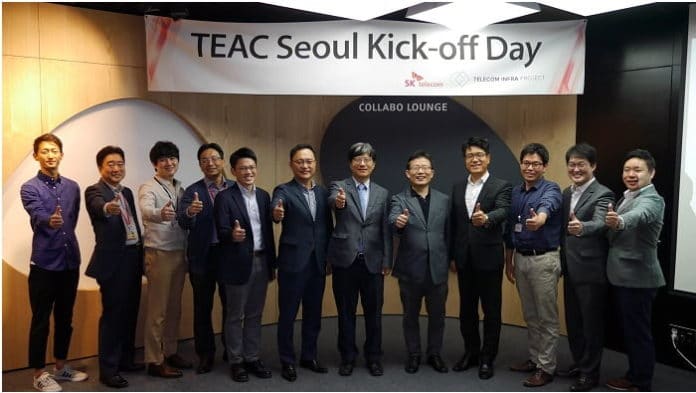 SK Telecom’s accelerator program will focus on the development of breakthrough technologies and products aimed at bringing innovation to telecommunications. SK Telecom is currently operating its TEAC in Seoul, while BT and Orange are running TEACs in London and Paris, respectively. In addition, Deutsche Telekom has recently announced plans to establish a TEAC in Berlin.

The three companies –Optella, Kulcloud and Transcelestial – have been chosen from over 30 applicants to join the TEAC in Seoul.

Optella, established in 2015 by a group of senior researchers from the Electronics and Telecommunications Research Institute (ETRI), is an innovative tech firm headquartered in California with an R&D center in Korea. Based on its strength in silicon optical bench (SiOB) based single-mode photonics and electronics integrated technology, Optella plans to concentrate on developing a cost-effective and low-power 5G wireless optical network solution to maximize transmission efficiency for massive data.

As a cloud networking company founded in 2011, Kulcloud has been developing advanced products and solutions required for Software Defined Networking (SDN) in the forthcoming 5G era. At TEAC Seoul, Kulcloud will concentrate on developing a technology that satisfies requirements for time sync, QoS (Quality of Service) and low latency so that 5G Packet Fronthaul can be configured based on white box switch and DevOps principles using SDN. Its technology is expected to meet 5G networks’ requirements for faster time to customer in an environment characterized by widely distributed resources and tight constraints on service quality.

Transcelestial, a Singapore-based startup, is developing a laser communication solution to replace existing wireless communication technology. The aim is to develop a constellation of nano satellites which uses lasers to transfer and relay data for ground, satellite and deep space applications. This will be the fastest (up to 100 Gbps), long-distance, point-to-point wireless communication network possible. Working with the TEAC in Seoul, Transcelestial will prepare for a demonstration of wireless backhaul for a small cell device in a master slave outdoor urban setup to prove the reliability and superiority of its FSO (Free Space Optics) solution. This solution is expected to be pivotal in building a cost-effective and robust 5G infrastructure.

The three companies will take part in the TIP summit to be held from November 8 to 9 in California’s Silicon Valley and introduce their technologies and solutions to global members of the TIP community. The event will also provide them with a chance to meet and collaborate with startups from other TEACs.

TEAC Seoul will not only enable the three chosen startups to test and advance their new technologies on SK Telecom’s trial networks, but also provide office space and comprehensive business consulting. Furthermore, Draper Athena, SoftBank Ventures Korea, and the Seoul Business Agency will be actively reviewing investment options among the startups.

“SK Telecom is delighted to announce the three bright startups that will join us on our journey toward the next-generation network,” said Park Jin-hyo, Senior Vice President and Head of Network R&D Center of SK Telecom. “At TEAC in Seoul, we will work closely with Optella, Kulcloud and Transcelestial to realize innovations in the telecommunications infrastructure ecosystem.”