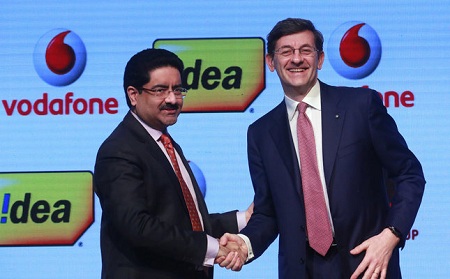 Vodafone to combine its subsidiary Vodafone India (excluding its 42% stake in Indus Towers) with Idea, which is listed on the Indian Stock Exchanges.Highly complementary combination will create India’s largest telecoms operator1 with the country’s widest mobile network and a strong commitment to deliver the Indian government’s ‘Digital India’ vision.

Aditya Birla Group Chairman, Kumar Mangalam Birla, said:
“Throughout its history, the Aditya Birla Group has been synonymous with the task of nation building and driving inclusive growth in the country. This landmark combination will enable the Aditya Birla Group to create a high quality digital infrastructure that will transition the Indian population towards a digital lifestyle and make the Government’s Digital India vision a reality. For Idea shareholders and lenders who have supported us thus far, this transaction is highly accretive, and Idea and Vodafone will together create a very valuable company given our complementary strengths.”

Vodafone Group Plc Chief Executive, Vittorio Colao said:
“The combination of Vodafone India and Idea will create a new champion of Digital India founded with a long-term commitment and vision to bring world-class 4G networks to villages, towns and cities across India. The combined company will have the scale required to ensure sustainable consumer choice in a competitive market and to expand new technologies – such as mobile money services – that have the potential to transform daily life for every Indian. We look forward to working with the Aditya Birla Group to create value for all stakeholders.”