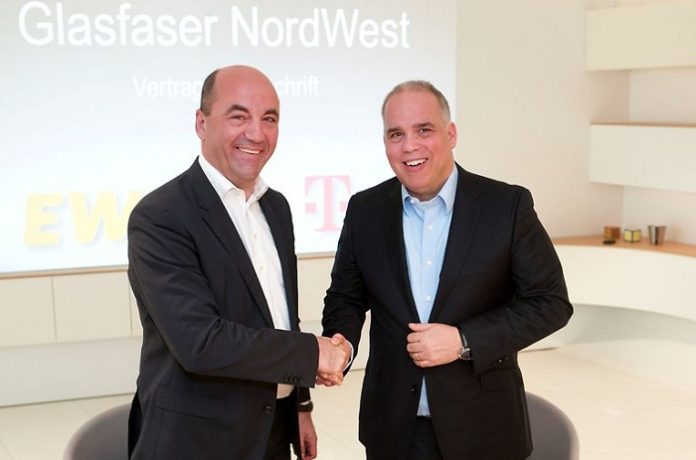 Deutsche Telekom and energy and telecommunications company EWE signed a contract that establishes a joint venture between the two companies, representing the next step in their collaboration. The joint venture is called “Glasfaser NordWest” (“NorthWest Optical Fiber” in English). The two companies also formally notified Glasfaser NordWest with Germany’s Federal Cartel Office.

Glasfaser NordWest aims to provide up to 1.5 million households and business locations with fast internet. The company will be active in parts of Lower Saxony, North Rhine-Westphalia, and Bremen. All customers will be offered fiber to the home (FTTH). The two partners expect to invest up to two billion euros over an approximately ten-year period.

“No one invests as much in digital infrastructure as Deutsche Telekom,” says Dirk Wössner, Board of Management member responsible for Germany. “We’re Germany’s digitalization engine and we’re shifting into high gear. Glasfaser NordWest will capture enormous synergy effects, because we will plan and build the fiber-optic infrastructure together. This means we’ll have greater capacity utilization in the operating phase. It also means we’ll be able to connect households that would have been uneconomical otherwise. The new joint venture is logical and a manifestation of our collaboration-based strategy. Ultimately, we are still convinced that we have to team up with other companies to digitalize Germany – and without any regulatory intervention. Our partnership shows: FTTH expansion without regulation works. We’re boosting expansion and we’re willing to cooperate with competitors. We don’t need regulatory intervention.”

“We are thrilled with this important step in our partnership,” says Stefan Dohler, CEO of EWE. “In northwest Germany, EWE is known for fast internet and the digitalization of rural areas. We’ve already achieved a lot on our own, but we want to offer even more fast internet connections to as many people in our home region as possible. By teaming up with Deutsche Telekom, we can achieve this goal more quickly. Everyone in northwest Germany stands to gain from this joint venture. Glasfaser NordWest will build the infrastructure, creating the foundation for digitalization, and customers can then choose their provider. The services from the new infrastructure will be available to all interested telcos under the usual commercial terms.”

The joint venture does not have an expiration date. Deutsche Telekom and EWE had already signed a non-binding declaration of intent in December 2017, signaling interest in the joint venture. The two companies plan to register the joint venture based in Oldenburg as soon as they receive approval from the cartel office.

The two partners will build the infrastructure through a competitive selection process, acting as general contractor. In the first two years after the joint venture is founded, Glasfaser NordWest will designate the expansion areas in advance. The two parent companies, Deutsche Telekom and EWE, will carry out the upgrades. After this period, Glasfaser NordWest will also offer the expansion areas for bidding by third parties through a selection process. Once the lines have been laid, EWE, Deutsche Telekom, and all other interested telcos will compete directly for the respective customers.

Fiber-optic lines will become available to the first customers in the expansion area in 2020.