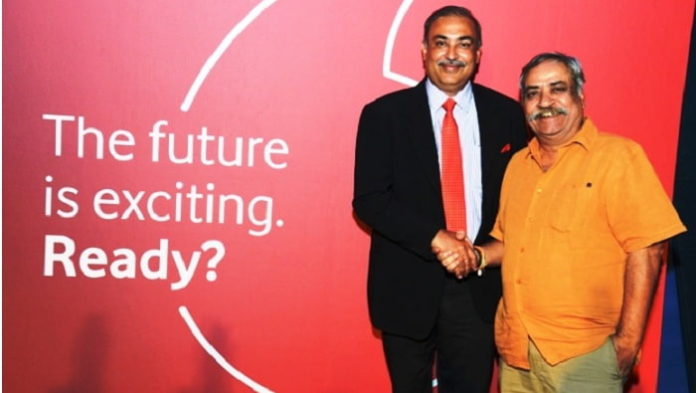 Vodafone announced a significant evolution of its brand positioning strategy, strapline and visual identity worldwide – the first changes to one of the world’s best-known brands since the introduction of the ‘Power to you’ strapline in 2009.

The strategy – to be implemented across all 36 countries* in which the Vodafone brand is present – is designed to underline Vodafone’s belief that new technologies and digital services will play a positive role in transforming society and enhancing individual quality of life over the years ahead.

Vodafone’s brand positioning strategy focuses on the theme of optimism about the future, using the new strapline, “The future is exciting. Ready?”. The first part of the strapline will be presented in local languages with the second part – “Ready?” – presented in English. For example: “il futuro è straordinario. Ready?” in Italian;
and “El futuro es apasionante. Ready?” in Spanish.

The new visual identity will place much greater emphasis on Vodafone’s iconic ‘speech mark’ in the biggest change to one of the most recognisable symbols of Vodafone since the ‘speech mark’ logo was created in 1998. The ‘speech mark’ will now appear as the central graphical focus overlaid on all marketing and marketing communications activity. The logo will also appear in a new 2D design in place of a skeuomorphic 3D approach.

The brand positioning strategy and related advertising campaigns were developed after a period of extensive research and concept testing, including quantitative and qualitative inputs from nearly 30,000 people in 17 countries.

On 6 October 2017, Vodafone will commence the largest advertising campaign in its 33-year history. The lead TV commercial – a 60-second film focused on how human interaction remains constant while technologies evolve over time – was produced by Ridley Scott Associates.

Grounds for optimism about the future
Vodafone commissioned opinion research among almost 13,000 people in 14 countries** to assess the extent to which the public are optimistic – or pessimistic – about their future prospects. The research conducted by YouGov found that:people of all ages believe that technology innovation will have the most positive influence on the future over the next 20 years;

18-24 year olds are the most optimistic about the future: 62% of younger people surveyed believe that living standards will be better in 20 years’ time compared with today; and respondents overall in all age groups, believe that their own living standards, and those of children, will have improved 20 years from now.

3D printed components for housing construction, with 4D printed components that evolve over time as families’ accommodation requirements change;a five-fold increase in global power generation capacity as clean energy such as solar panels are extended from rooftops to windows, walls and even some highways;personalised medical interventions such as 3D bio-printing of organs and limbs; new public transportation systems connecting cities with trains running at up to 600mph (966kph);

Further details of the Futerra research can be found here: Futerra Briefing Paper

“We believe there are very good reasons to be optimistic about the future as emerging innovations in science and technology begin to have a profoundly positive impact on society. Vodafone has a long and proud history of bringing new technologies to hundreds of millions of people worldwide, enhancing quality of life and transforming the workplace. Our new brand positioning is intended to embody Vodafone’s mission and purpose to help our customers and communities adapt and prosper as these remarkable new trends reshape the world.”